Why Taking an Alaska Cruise is 'For the Birds'

About Alaska Outdoor Activities
Bears and whales and other marine mammals are high on everyone’s list for wildlife sightings in Alaska. But we think any trip to America’s Last Frontier is, well, ‘for the birds.’
With more coastline than the rest of the United States combined, as well as parks bigger than some countries, Alaska’s natural treasures include abundant populations of some of the continent’s most interesting, colorful, and majestic birds.
You may think, in northern climes, the bird population doesn’t stack up against tropical feathered friends. But in fact, there are birds in Alaska in every color of the rainbow, including vivid blues, reds, oranges and greens.
And in every size, from a flame-colored hummingbird only a couple of inches long… to a regal eagle with a nearly seven-foot wingspan!
Pack your binoculars on your next trip to Alaska and watch for these avian residents of Alaska.

If you were asked to name a bird in Alaska, your answer would likely be ‘Bald Eagle,’ a bird that symbolizes not only America, but the wilderness frontiers Alaska is famous for. More bald eagles – an estimated 30,000 - live in Alaska than the rest of the U.S. combined.
WATCH THIS VIDEO to see bald eagles in action in Alaska.
America’s national bird is unmistakeable. It’s an immense and heavy raptor: 3 feet long with a wingspan that can reach 7.5 feet! Its dark body, with white head, sharp, hooked yellow beak and matching legs is dramatic, and distinguishes it from other birds of prey.
It’s easy to spot bald eagles in Alaska. They’re found all along the coast, where they hunt for fish and sometimes small mammals. They have an eery screeching cry, so you can often hear them before you see them. And bald eagles mate for life, building large, treetop stick nests to raise their young.

At the absolute other end of the size scale, a bird that hovers around three inches long, and barely tips the scales at under 2-tenths of an ounce. Where bald eagles soar and dive and strike, Rufous Hummingbirds dart and hover with great speed and manoeuvrability. 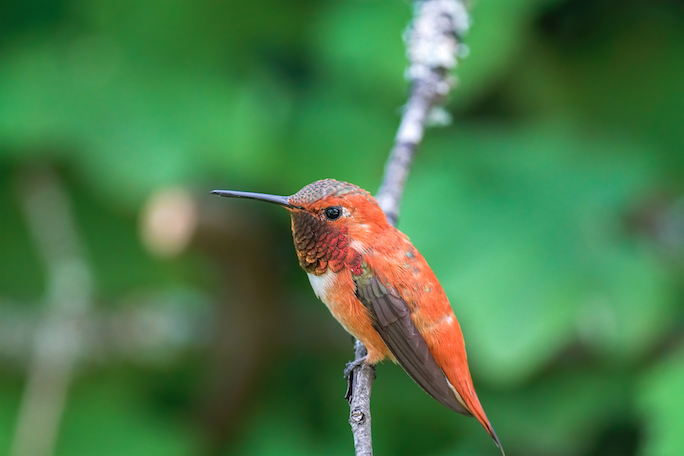 The Rufous Hummingbird’s name gives its plumage away, since the word means ‘reddish’. But that name undersells these tiny birds, which are brilliant orange on their backs and bellies, with red throats and black wings, a combination that makes bird watchers describe rufous hummingbirds as “glowing like a bed of coals.”
Do you think hummingbirds stick to purely warmer climes? These hummingbirds take annual, record-breaking migrations. While they fly vast distances to Florida, Mexico or even Panama to winter, the longest hummingbird migration on record, Rufous Hummingbirds live in southern Alaska during the prime tourist season. Small flying insects and nectar from flowers that bloom in Alaska’s short season, like its famous ‘fireweed,’ sustain these unique tiny birds in the north.

The state bird of Alaska isn’t the showy bald eagle. It’s the modest, chicken-like willow ptarmigan, part of the pheasant family, and they’re called grouse in the British Isles. Like grouse in the U.K., they are a game bird, with the widest range in Alaska.
As do their cousins the chickens, willow ptarmigans forage on the ground, eating on tree buds and insects in forests and moorlands in northern climes. 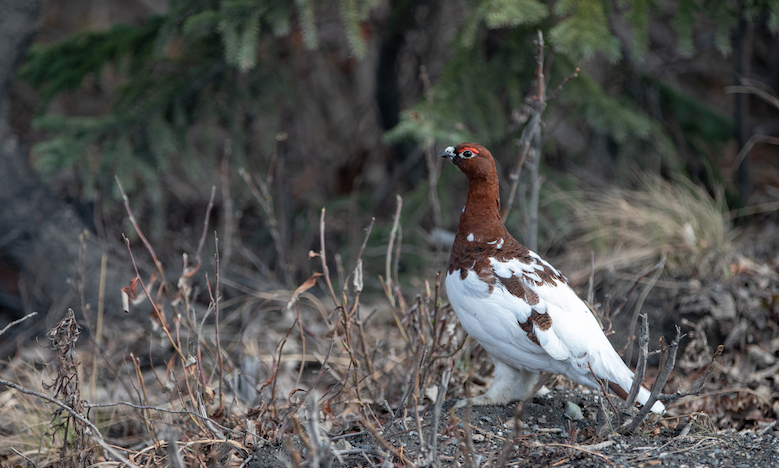 These large ground birds are the largest of three ‘Arctic’ grouse in Alaska. Willow ptarmigan are fully white when young, and darker, mottled browns when older, with a dashing red brow and distinctive feathered feet which help it travel along frozen ground.

Common murres are abundant in the Gulf of Alaska. They look like penguins, with tuxedo coloring and upright stance, but of course, penguins are only found at the South Pole, not in the north.
Murres, unlike penguins, can fly – up to 125 miles from their nests high on cliffs of rocky shorelines to find food for their chicks. They can also dive up to 600 feet for small fish. Remarkably, when chicks are ready to fledge, their father swims below them at the base of the cliff and calls to them. Chicks hurl themselves 800-1000 feet off the cliff and swim to their father, who stays with his chicks, caring for and feeding them for a month or two.
After breeding season, murres are seen in large groups called a ‘bazaar’ or a ‘fragrance’ on top or flying across open ocean.
WATCH THIS VIDEO to see murres on cliffs in sea caves in southern Alaska.

Who can resist a smile when you spot a tufted puffin? Nicknamed ‘sea parrots’, their black bodies and white faces with yellow plumes set off their most eye-catching feature: an oversized red and orange bill.
These stocky, awkward seabirds are almost comical in appearance, easily spotted in flocks flapping short wings and flying just above the water line. Their wings are adapted best to swimming underwater, where they catch fish and often snag multiple fish cross-wise in their beaks.
WATCH THIS VIDEO to see puffins on the sea in Alaska.
Puffins are abundant in Alaska, and favorite image for souvenirs from America’s 49th state.

By: Lynn Elmhirst, Producer/ Host, BestTrip TV
All rights reserved. You are welcome to share this material from this page, but it may not be published, broadcast, rewritten or redistributed.

The World's Tallest Geyser Is At It Again

Video: Get Shot Out of This World-First Bungy Catapult in New Zealand